skip to main | skip to sidebar

Bill has whipped up a summary of his time over there and placed it on his own website.

Feel free to wander over and have a read:

My photos can be found here:

Well, that's probably as useful as this blog is going to get.

There were a couple of minor issues with the car, but it was essentially ready to go as soon as it came out of the container. So the minutes before the race ewere pretty relaxed. 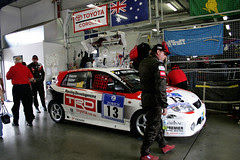 We wheeled the car out in preparation for getting it onto the starting grid. 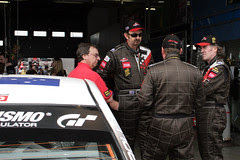 Then everybody posed for a team photo: 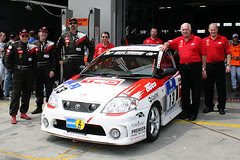 ...then it was out of pit lane onto the starting grid. 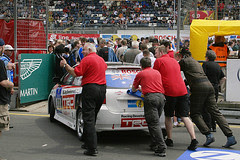 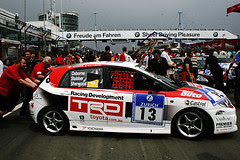 Then it was slotted into its starting position. 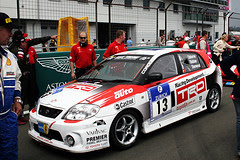 Colin, Paul, and Bill with their steed. 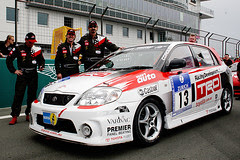 At this point, I raced up onto one of the better viewing places, but then the heavens released a few bolts of lightning followed by a torrent of rain. The start of the race was delayed for about 90 or so minutes until it settled down. I, and my camera, ended up drenched. 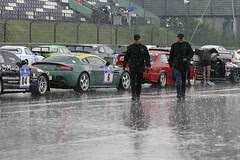 Many took this opportunity to change the tyres on the grid to wet weather tyres. As it turns out, this was a bad move, as the rain stopped and track dried out pretty quickly. 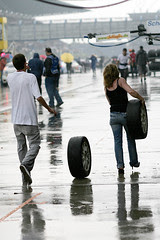 My apologies for the lack of action here. It turned out the Internet access at the track was non-existant, so we were unable to do any updates.

As for the race, the start was delayed by 1.5 hours because of a severe thunderstorm, but then started at 4:30pm with minimal fuss. At about 3:30am the race was redflagged because of severe fog. At this stage the Corolla was in 89th position, an excellent run.

The 5 hours it took for the race to be restarted allowed a lot of the cars to be repaired resulting in an almost full field starting again, removing the reliability and endurance factors from the race.

I have heaps of great photos, I'll post them up over the next few weeks as I process them.

Bill Sherwood driving the Osborn Motorsports Toyota Corolla around the Karussell during the 2007 Nurburgring 24hr Endurance. 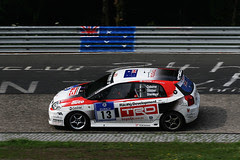 And a Lambo Gallardo on the same part of the track. 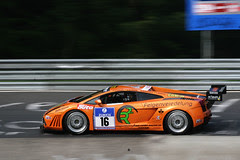 A night shot of the back part of the GP circuit. 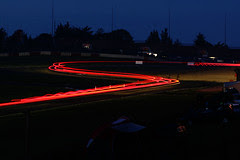 By the way, we never got to meet the Aussies (both of them) at the track who put up all the signs and flags and inflatable boxing kangaroos and crocks and stuff. I did find out that some idiot slipped while going over the fence onto the track the night before the race and broke his leg. Yup - it was the Aussie. ;)
at 10:17 pm No comments:

A quiet day. The car was essentially ready, and Bill decided he didn't need to go to the pits.

Instead, we went for a little explore around the track while some of the demo races were on. We worked out the pit passes got us pretty much anywhere, even to the paid spectator sections of the track many km away. We did a *long* walk through the gypsy camps in the forest to get to the Karosel, the extreme left-hander that looks so great. We found the the pitpasses even managed to convince some of the marshals that we were allowed up to the armco. While we didn't take advantage of the priveledge, it was nice to know the power a bit of plastic held.

We even managed to get a parking marshall to reserve a spot so we could drive there tomorrow instead of walking.

I got some nice photos, then Bill went back to the hotel and I experienced the pit action while racing was happening. A bit more lycra. ;)

I saw Sabine today, a single second of her face as she started to say "Thanks everybody, Goodbye!" and literally, a second later the crowd departed, and she vanished as if she wasn't even there. :/ 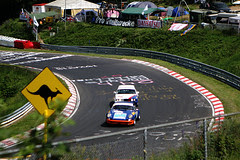 Today was another long day. Up and out at 5:30am and back in the hotel at 11:30pm. It is still light enough to read a newspaper at 10:30pm, which actually makes it feel like 5pm, leaving precious little time to have a beer and a meal and go to sleep.

Bill has been rather nervous of late. This was all exciting and a goal of his, but coming over and seeing the track for the first time makes it suddenly real. Seeing the team and the effort and skills they put into the car is sobering also. They are a well-oiled team, working with determination and precision and have done so for 12 months with the one goal of competing in this race.

Now imagine having to drive their baby around an unfamiliar and extremely unforgiving racetrack.

Having said that, he did a driver training course designed for n00bs, and actually did quite a few laps in the little rented Ford Fiesta. Now that he has been around the track, he is a little (*Bill says "A LOT") more comfortable.

We have good drivers, a good car and a good team.

Here is Bill taking his first steps onto the 'ring... 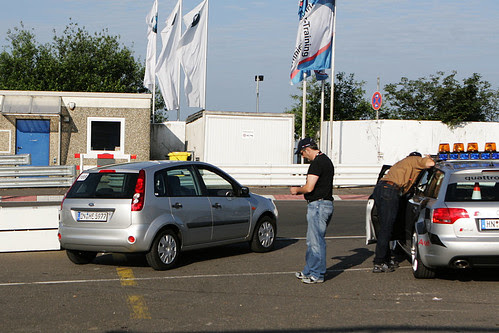 And here he is zooming past on his second 15minute lap. ;) 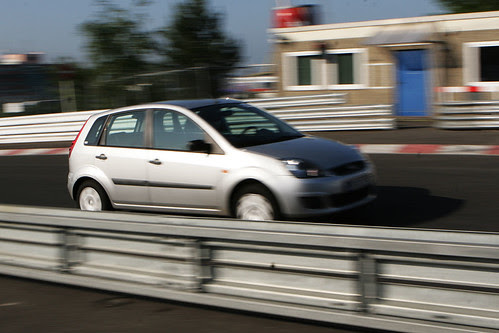 While he was throwing the little beast around, I managed to con a ride with one of the track officials - in the Audi in the photo above - I think I am still on the adrenalin high.

Here is the gratuitous arse shot for Wayne. 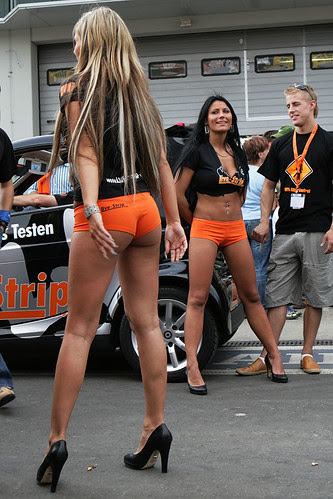 As for this photo, this was a public road and not the 'ring... 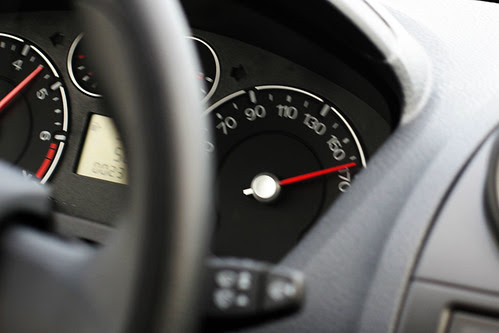 Day 1 started at 6am after a long night chasing the sunset. It finished after midnight in a B&B in the middle of nowhere.

Will update in a few hours. 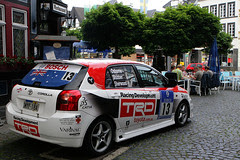 Bill is already half-way there, I am about to jump on a plane.

Aston Martin
A month ago, Aston Martin revealed that they were going to go hard this year. Last year, a single car straight off the showroom (with relevent safety mods of course) finished 24th, with the CEO as one of the drivers.

This year, they have released a model specially suited to this track and will be racing two of them. One will again have the CEO at the wheel, and this time his co-drivers will be other suits. The other car we can only assume will be driven by professional drivers.

Maserati
The other big player of last year's race, had two factory cars entered. The results show a 36th place and a DNF. (For comparison, the Corolla got 77th out of the 141 that finished) I cannot find any mention of them being in this year's race, so it looks as if they went hard, then went home.

Lamborghini
A Lambo finished 20th last year, and this year they are back, with another privateer team to keep them company.


I have also just found this year's startlist from the official site. Download it here. (pdf format)
at 8:08 am 1 comment:

This article in drive.com.au describes one of the other Australian teams - a big player in a Porsche 911 GT3 RSR, and also involves a cameo by "Team Mal Rose 1" in a Commodore (their car was going to be an RX7 detuned to handle 24 hours straight of punishment, but they decided on the commodore) and "Osborne Motorsport" (us!) in a *mumble* Corolla *mumble*.

Here is the same article in the Melbourne Age.
at 9:50 pm No comments:

Bill's new threads have arrived.  Black satin with splashes of colour, will look nice with his red tie I suspect. 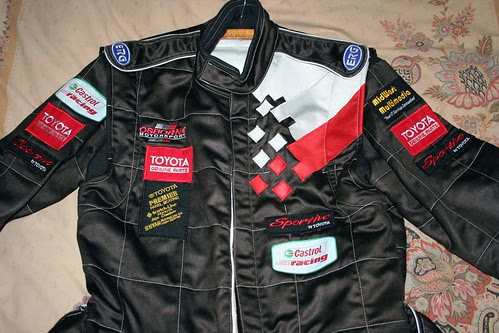 We both arrive there about the 5th of June, and pit action starts from the Wednesday 6th of June. There will be sporadic updates during both those days, but I suspect the main action will be during the times the track is officially closed for race related events, which is during these particular times:

These convert to Australian East Coast time of:

I am guessing the first two closures are for practice, with the Saturday being a morning full of support races with the main one starting at 3pm german time. (11pm Aussie time) and finishing 24 hours later.
at 11:46 am No comments:

This is the team car. 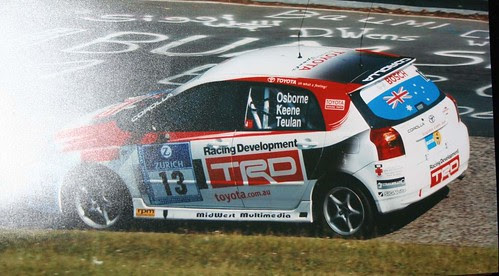 It is a photo of a photo, so please forgive the quality.
at 11:38 pm No comments:

This blog is set up as a travel diary for our upcoming trip to the Nurburgring 24hr endurance race. Bill is driving, and I will be 'hanging out' in the pits documenting the event with my camera.

This blog will allow all those interested to keep up to date, as there is apparently web access at the track.
at 9:51 pm 8 comments:

The Green Hellbound
Michael is an electrician living on the beach in a tiny coastal town in Queensland. He is an amateur photographer and claims he once saw a ferrari. Bill is a pilot and a backyard engineer and racing car driver in his spare time. he is tall, handsome and single. (That last part has nothing to do with the fact he still lives at home with his father) Together, they fight crime.